In a previous blog, I discussed the philosophical model known as dualism, and the problems that we can end up with if we try to use dualism to understand complex health problems. The blog also highlighted the usefulness of philosophy for physiotherapists. This current blog will aim to describe how to move from dualism towards a more useful Biopsychosocial Model, using plenty of plain English, an occasional philosophical term, and the aid of Microsoft SmartArt. It will keep up the theme about the potential for insights into how we think (philosophy) to enhance physiotherapy care.
If you read the previous blog, you will remember that Descartes put forward the idea that the body was like a machine, which could be treated like a piece of clockwork. To understand health problems, all we needed to do was to take the body apart, find the “broken part” and fix it. Dualism represents the mind (or the soul) as a separate thing altogether, with only a weak connection to the body.

Dualism encourages us to sort health problems into either physical problems, or problems with the mind. Dualism also allows us to think that physical health problems are “real” and that mental health problems are “imagined” or “all in the mind”. This is a very unhelpful way to think about our health, as was discussed in the previous blog. An alternative approach (or model) was put forward in 1977 by Dr George Engel. This way of thinking is known as the Biopsychosocial Model, and it has been very influential within healthcare. I will explain more about some aspects of the model later on, but first I will outline some ways in which it has been misunderstood.
Unfortunately, Engel’s rather complex ideas have been oversimplified over the years. Some people have (mis)understood the Biopsychosocial Model to just be about collecting separate sets of information about the biological, psychological and sociological factors which affect health problems. This overly simple understanding can still allow us to make the mistake of categorising health problems as either biological problems, psychological problems, or social problems. So instead of the two categories of dualism, this overly simple Biopsychosocial Model gives us three categories: perhaps we should call this “Trio-ism”?
Microsoft SmartArt can show this over-simplification like this:

I’m going to introduce a key philosophical term here, to describe this 3-segment model. The key term is “ontology”, which is a word used to describe statements about how reality is structured: “the kind of things that exist, the conditions of their existence and the relationships between these things” (Blaikie 2007). Basically, it is a description of what people think reality is like. For example, thinking that the Earth is flat is an ontological belief. Similarly, thinking that the Sun revolves around the Earth is an ontological belief. They are both ontological statements that most people now see as inaccurate, even though they used to both be widely held. I think that the simple 3-segment Biopsychosocial Model shown above is also a mistaken ontological belief, and it can lead to misunderstandings about health problems. This way of representing the 3 segments is known as a “flat ontology”, and I will compare it now with a model which has “ontological depth”, or is “ontologically stratified”: in plain English, it has layers.

The idea that reality is “layered” has been around for a long time, but it has been developed by a philosophy known as Realism, and in particular a branch of Realism known as “Critical Realism” which has been influenced by the thinking of Roy Bhaskar (Bhaskar 1975, Collier 1994). Realism and its’ ideas about stratification can be helpful to understand complex health problems, as they don’t fall into the trap of categorising health issues as only biological, psychological or social problems (Bhaskar and Danermark 2006). Ontological stratification (or layering) suggests that many scientific domains have another level of scientific study “below” them. For example, it suggests that biology cannot be fully understood without understanding chemistry. It goes further, in suggesting that biological organisms couldn’t exist without the ‘building blocks’ which chemistry studies. Similarly, it suggests that chemistry cannot be fully understood without understanding physics. Again, it suggests that molecules couldn’t exist without the ‘building blocks’ which physics studies.

Realism is very clear in saying that a good grasp of physics doesn’t allow us to confidently predict what will happen when we start to study molecules. Similarly, Realism argues that understanding chemistry won’t tell everything we need to know about living organisms. Realism has a specific word for this: “underdetermination”. One of the consequences of underdetermination is that studying each layer and the interaction of events occurring at all layers is necessary for a complete understanding of what is happening. This means that we cannot be “reductionist” and at the same time have a full grasp of what’s going on in the world. Reductionism is a tendency to look only at smaller and smaller components in order to understand how things work. Reductionists think that the answers to all of our questions can be found by looking “down a microscope”, by “moving down a layer”.

There are helpful consequences which come from understanding the world using a stratified model like the one shown above. Firstly, it reminds us that psychology (the study of thoughts, feelings and behaviour) “depends upon”, but is not fully determined by, events at a biological level. Of course, without biological human brain activity, there would be no human psychology to study. However, we should not expect the study of biology to explain everything about human experience. For example, we have a reasonable understanding of the changes which take place in the body when people are put under acute stress: the “flight or fight” response, as it is known. We could for example measure a person’s cortisol and adrenaline levels, their blood pressure, their breathing rate, and muscle tension: but none of this would tell us what the person’s next behaviour would be. That would depend to a large extent on the person’s situation, because whether they are playing rugby, doing a driving test, going to war, or riding on a rollercoaster will influence the behavioural outcome of all these biological mechanisms. We therefore need to understand their social and physical context in order to understand behaviour. Ontological stratification reminds us that a full understanding of the world requires an understanding of all of the levels, and the interactions between levels. Moving down an ontological level may sometimes provide us with answers about “how” change happens (mechanisms) but we may need to move up an ontological level to fully understand the role of context in shaping the operation of these mechanisms.

If we ask whether the “fight or flight” response is biological, psychological or social we are asking the wrong question. We are trying to categorise a process which crosses all of the categories. This is the same mistake that we can make when we try to categorise common health problems such as back pain, heart disease, Chronic Fatigue Syndrome/ME, diabetes or cancer as either biological, psychological or sociological in origin.

Having explored ontological stratification, if we now return to Engel’s initial ideas about the Biopsychosocial model, we can avoid overly simplistic “Trio-ism” just as we can avoid the pitfalls of Dualism. Engel suggested that we could use General Systems Theory and nested models to understand health.

Microsoft SmartArt can show a nested model like this: 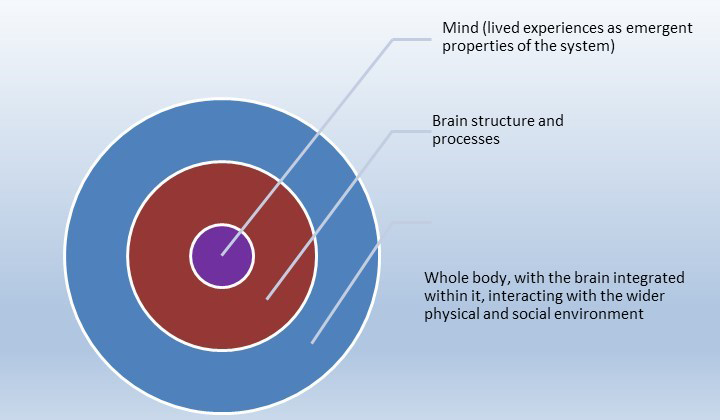 I’ll use a simple example to explain how this model works. A person is sitting in a bar on holiday, with a glass of their favourite wine on the table in front of them. This describes their physical and social situation, but it doesn’t tell us how they might feel or what they might be thinking. Now they take a sip of their wine. The volatile chemicals in the wine enter their nostrils and stimulate the olfactory system. The liquid enters their stomach, then the alcohol enters their bloodstream, and crosses their blood-brain barrier. So far, this is a description of biology: but what did they experience as they smelt and tasted their drink? How might the alcohol affect their experience as they drink more? Whilst their experience is dependent upon biology, which again is dependent on brain chemistry and its’ relationship with the alcohol, the experience itself it is not simply determined by these factors. Their “lived experience” is more complex: it can be thought of as an “emergent property” of the entire system, dependent upon all of the elements in the system but not explainable by looking at the parts alone. How might their experience be different on the first, or last, evening of their holiday? This is a “nested” model, as suggested by Engel: a “Biopsychosocial model” of drinking a glass of wine. If we need a stratified biopsychosocial model to understand a holiday drink, we certainly need one to understand health and illness.